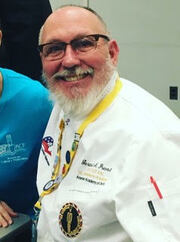 Gerard Prevost, CEC, CCE, AAC
Executive Chef
Gerard grew up in the restaurant business in St. Johnsbury, Vermont.  His dad, Archie Prevost opened a Dunkin Donuts franchise in 1970 when Gerard was 11 years old and as an eager learner, Gerard watched, learned, swept floors, made donut boxes, and helped fill donuts.  His father sold his share of the franchise two years later and opened his own bakery, coffee shop, and restaurant called “Archie’s”.  This business was very successful and Gerard worked there all through his high school years as a donut maker, short order cook, and baker.

Gerard knew that food was his passion and decided to pursue culinary arts at St. Johnsbury Academy, an independent high school that was also the area vocational center under the direction of John Carroll, an active ACF member. He graduated high school in June of 1977.  As a high school student Gerard was accepted into the very first advanced standing program offered at Johnson and Wales College in Providence, Rhode Island and was able to graduate with an A.O.S. degree in culinary arts in 1978.  He was affectionately known as an “eight week wonder” with his fellow advanced standing classmates as they completed their first year of the program in eight weeks in the summer and then joined the class of 1978 for the final year of the associate degree in culinary arts program.

After graduating from Johnson and Wales, Gerard worked for two years at the Mount Washington Hotel in Bretton Woods,New Hampshire and the Boca Raton Hotel and Club in Boca Raton, Florida traveling between the two resorts for the seasonal work.  The call of the family business was strong and Gerard decided to return home to St. Johnsbury to work at “Archie’s” and with his father opened a second location.   He managed that restaurant and bakery for six years until the family sold the business in 1986.

An opportunity opened at a small inn in Lisbon, New Hampshire and Gerard accepted a position as the Executive Chef at the Ammonoosuc Inn.  He developed the menus, managed a small kitchen staff, and enjoyed expanding his skills around fine dining.  Gerard enjoyed this very much for five years.

In the fall of 1990, Gerard noticed an ad in the local paper that the culinary instructor position at St. Johnsbury Academy was open.  The program had struggled for a few years and the school was looking to invigorate it.  Gerard applied for the position and in September of 1990 started his career  at the Academy.  He had 6 students that first year and was only in a half time position.  He was still working full time at the Ammonoosuc Inn.  The next year 18 students were in the program and  within 5 years the program grew to over 50 students and another instructor was hired.

Gerard became an active member of the ACF soon after.  He is currently an instructor of the introduction to culinary arts class and part of a full time culinary team of four instructors.  Enrollment in the culinary program is 100 to 120 students each year, most in the introduction class with 30 to 40 students continuing with the Culinary I and II curriculum. Some of Gerard’s proudest accomplishments are earning his certifications as an executive chef and culinary educator, coordinating the self-study and documentation for the Academy’s secondary certification, being inducted into the American Academy of Chefs and the bonds and friendships made through the ACF.Gerard recently received the ACF Presidential Cutting Edge Award that recognizes culinary excellence, leadership, and service to the culinary profession.