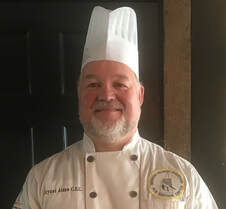 Bryant Alden CEC
Bryant Alden , Executive Chef at the Wildcat Inn & Tavern in Jackson  NH.
Bryant is a Certified Executive Chef and President of the White Mountain Chapter of the American Culinary Federation.  He was raised on Cape Cod, MA. As a child he got his passion for cooking from his grandmother who cooked for affluent families who summered on the Cape. As a teenager, he spent his years cooking in various prestigious coastal restaurants while attaining his culinary skills. Bryant spent the next few years living in Boston working for an upscale catering company that hosted events all over the city.
Chef Bryant has taken numerous accredited courses offered by the American Culinary Federation (ACF) and National Restaurant Association.Chef Bryant enjoys preparing dishes influenced by culturally diverse regions around the globe.
Over the years, his extensive career as an Executive Chef and Consultant has taken him throughout New England. He is a past recipient of White Mountain ACF “Chef of the Year”
He has been a nationally approved Culinary Evaluator supporting the culinary certification process. He has mentored many culinarians and enjoys sharing his knowledge and love of culinary arts.  He volunteers to judge “Pro-start” culinary competitions for high school students in NH and ME.
Bryant’s culinary management has encompassed hotels, healthcare, education, personal chef services, Restaurant design & development; a decade of restaurant / catering ownership.